The Canadian Association of Forces Linemen (CAFL) was formed in 1986 to provide a means of friendly association for active, former, and retired Canadian Armed Forces Linemen. It aims to foster amongst them a spirit of mutual helpfulness, uphold the ideals and traditions of the lineman trade, and to promote the welfare of the membership.

CAFL is governed by the current Constutition and National Executive Committee (NEC), which is elected by members during the Annual General Meeting (AGM) held every February. The NEC must consist of a President, Vice President, Secretary, and Treasurer, with other positions being created as necessary. To keep members informed and in the interest of transparency, the meeting minutes are published from the last AGM (the 30th in 2018), while older ones can be requested by members.

Underneath the NEC are seven Regions that directly serve their local membership and handle events or matters specific to their area. If the lineman population is large enough within a Region then a Branch can established with approval by members and the NEC. Currently, the only Branch is Petawawa Branch.

All that is required for membership is to have passed a CAF Lineman apprenticeship course and submit an application form. Those who do not have the course but who want to be involved regardless may apply to become associate (non-voting) members instead as per CAFL's Constitution. 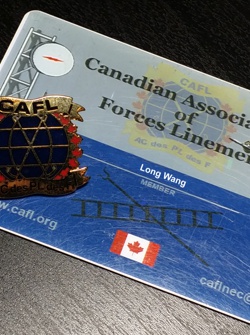 Benefits of membership include: Members' Association dues and volunteer support are put towards:

The CAFL Family Sponsorship was approved during the 16th AGM in 2005. It aims to provide financial assistance to a CAFL member or their sponsored dependant (spouse, children, grandchildren, brothers, or sisters) that is attending a recognized post-secondary institution full-time.

The scholarship is $300.00 and is awarded annually at the AGM from a random draw of all the applicants that have applied before the first of February. Those wishing to apply are invited to look at more details and application in this document.
Copyright © 2022 Canadian Association of Forces Linemen. Hosting and domain graciously provided by Fluke Networks. CAFL does not endorse or affliate with any organizations on this site.